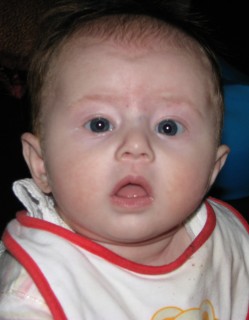 Pictured here is my 3 month old niece, Imogen, looking inquisitively at the camera in the cute way only babies can. Prior to her birth there was much speculation as to what her name would be. And as usual no one who guessed was right. I didn’t compete, but I wouldn’t have got it anyway. But I think Deb and Pete made the right choice with Imogen.

Anyhow, all this talk about names got me thinking about how people go about deciding what to call their children. Often a family name may be adopted according to tradition, or one significant to either parent. The sound of the name, how it rolls off the tongue, may be important to some too.

The ways the name can be changed, shortened and distorted should also be considered. Children at high school are ruthless, and adults aren’t much better, so it pays to ensure they won’t face needless ridicule, torment and possible psychological damage.

Another factor that seems to be socially important is uniqueness. Probably because people think there are already enough Michaels, Andrews and Davids. But it’s getting to a ridiculous level now where people will deliberately misspell a name so that it’s different to the other people with the same name.

The existence of the Internet seems to exacerbate this problem further. I’ve heard that people will choose names based on the availability of the internet domain name, or on how many results show up in Google (the fewer the better). Which is amusing since the usefulness of any domain will stay limited until they’re a teenager, by which time your carefully chosen name, with only 10 results in Google, will have been swamped by every other parent who thought the same as you.

With this trend in mind, I have devised another criteria for choosing names: how easy the name is to type on a computer keyboard. With the proliferation of computers it would seem pertinent to pick a name that can be typed efficiently. With all the typing your child will have to do, think of all the hours they will save across the course of their lifetime by choosing a good, typable, name.

Good names would avoid anything that slows down your typing. Things such as repeated letters, consecutive letters that require the same finger to press the key or having all the letters on one side of the keyboard. Some examples of bad names to type are Aaron, Lloyd, Edward, Jill, Phillip or Fredrick.

Perhaps it will get to the stage where people’s names will be shortened and mangled on the internet just as the English language has. No longer will someone’s name be ‘Eugene’, but ‘Ujyn’; and ‘Michael’ would become ‘Mykl’.

Either way I’m sure it’s going to get weirder.